In late 2008 Donovan ZS2DL started discussing the possibility of running a Multi-Operator station for the 2009 CQ WPX SSB Contest. After discussions with Mitch ZS2DK and myself, Donovan went ahead and ordered a set of ICE bandpass filters to bring the concept closer to reality. The original concept was to run two stations from Donovan's QTH, but this would have meant putting up a second beam etc etc. Closer study of the WPX rules for Multi-Two operation however showed that the stations could be up to 500m apart. GPS measurement showed Mitch's QTH to be 384m away from Donovan's shack - well within the limits! This then made the idea feasable! As Donovan already held a licence with a callsign ideally suited to WPX contesting - ZT2V - we reckoned that this was a great starting point!

Planning started in earnest at the beginning of 2009. In the latter half of 2008 (just before the collapse of the exchange rate) Donovan had begun accumulating equipment: a Yaesu FT-1000MP MkV and an Ameritron AL811 amplifier had joined his already-impressive lineup of Yaesu FT-2000, Quadra amplifier and 3-element SteppIR antenna. It was decided that the FT-1000MP and Ameritron would be used from Mitch's QTH along with his TH5DXX antenna.
Logging software to be used would be N1MM Logger, so a network had to be established. A wireless network link was set up a week before the contest, courtesy of Gary ZS2GA and Chris ZS2AAW. This network performed flawlessly for the whole contest weekend!!

The next step was to sort out the operators for the event. As this was a first for Port Elizabeth (there had never been a multi-op operation of this magnitude attempted from this part of the world before!) we looked for a core of experienced operators, with a couple of newcomers to benefit from the experience. Our original plan was for a team of 8, and we filled the posts with surprising ease: as our experience nucleus we went for the 2 Andres (ZS2BK and ZS2ACP) to complement Mitch, Donovan and myself. Our rookies were also easy choices - Henning ZS2HK and Glen ZS2GV. To round off our team, experienced contester Rhynhardt ZS6DXB was to travel down from Johannesburg to join us for the weekend. All seemed to be in place and ready to go..... 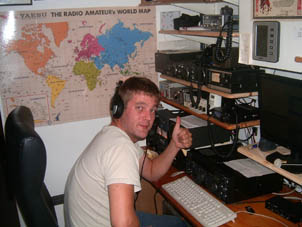 Henning ZS2HK was taking part in his first major contest!

As usual however, the wheels began to come off a couple of weeks before the event. First Andre ZS2BK had to pull out, due to family commitments, then Andre ZS2ACP was forced to withdraw due to a clash of dates with a prior commitment. The biggest blow however was the withdrawal of Rhynhardt ZS6DXB due to business responsibilities. Now reduced to 5 operators and only 2 weeks to go, we were in trouble. Much to our relief Anthony ZS2BA agreed to join the team; although a total novice with regard to HF, Anthony's enthusiasm lifted us significantly. However we were still a couple of operators short, and the operating shifts were going to be punishing, especially for the rookies. We did however receive a last-minute boost - Mitch's XYL Colette received her full licence (ZS2CR) some 12 hours before the contest, and became our 7th member. Colette has been doing very well on HF as ZR2CR since passing the RAE last October, and she was very excited at being able to participate! 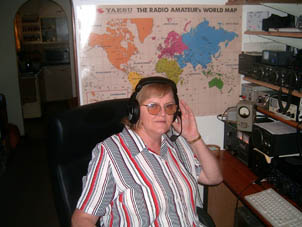 Colette ZS2CR received her licence the day before the contest!

The contest got under way with ZS2DL on 40m and ZS2DK on 80m. The first 6-hour stint however was very demoralising - Mitch had a lonely vigil, nothing at all on 80m all morning. Donovan fared only slightly better - 37 Qs only on 40m. This was largely due to the local regulations not being amended to allow operation between 7.100 and 7.200 in time - very few stations listened below 7.100 anymore!! When I arrived to take over from Donovan I was greeted by the words "I'm dying here boet!!" Mitch had already moved onto 20m, so I took over on 15, not expecting much activity there. The first couple of hours were spent fishing for anything I could hear towards Asia. Eventually some EU stations were heard, and I managed to get a run started. After a while though, the band exploded! By the time I handed over to Anthony ZS2BA we had 345 in the log on 15m alone! In the interim Henning ZS2HK had been plugging away on 20 and 10, and we were looking more respectable. 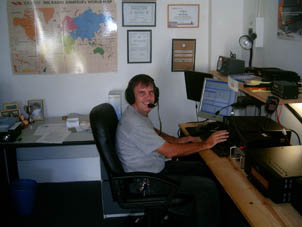 Anthony kept up the momentum during the afternoon (with a bit of help from Donovan) and Glen ZS2GV had a very difficult time on 20, with very slim pickings. Mitch and Donovan then took over for the nightshift, with everyone feeling quite satisfied. 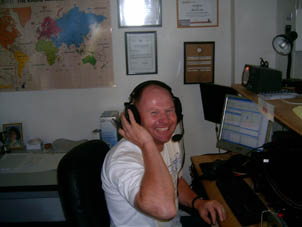 Anthony ZS2BA had the time of his life!!

I took over from Donovan at 00h00 UTC, and Henning took over from Mitch at the same time. Both of us trudged through the early hours, with me eking out another 20-odd Q's on 40 and Henning adding a couple of ZS stations on 80. At around 05h00 UTC I decided to look at 20m, and was very surprised to hear VK9LA on 14.205. As this was a call that I had been looking for desperately for the past week, I worked him under both the contest call and my own call. I also alerted Henning, and both he and Colette also made the contact. I then let Henning take 20m for the remainder of the shift, whilst I went to 15m. At 06h00 Glen ZS2GV took over from me, while Colette took over from Henning. The totals kept ticking along nicely, and when I took my afternoon shift at Mitch's QTH we were not far off the 1000 mark. With Anthony ZS2BA running on 15 and me on 20, we were fast closing on that milestone! 20m however was diabolical - the band was jam-packed from 14.100 right the way to 14.350 - sometimes up to 3 stations calling on a single frequency! It was only shortly after 16h30 UTC that I got a decent run going on 20m - by now the 15m total was above 700 and we sailed past the 1000 mark overall. We also achieved our secondary total of 2 million points comfortably. Mitch took over the 20m pileup at 18h00, and Donovan switched to 40 around the same time. They then soldiered on, with the final QSO being logged at 21h36. 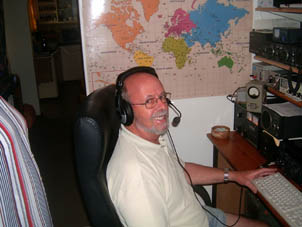 For a first effort as a multi-op station, this was a VERY satisfactory outcome. Many lessons were learned, much experience gained and (most importantly) a lot of FUN was had. Our general consensus is that THIS is what Ham Radio is all about!!! The teamwork and camaraderie was out of the top drawer, and those who missed out this time around certainly missed a great experience....

We will certainly look to do this again - maybe a bit better organised next time, certainly a lot wiser and more experienced next time too... a great start to multi-op contesting from the bottom end of Africa!!!

BACK TO ZS2EZ HOME PAGE