The greatest dream of any Amateur Radio operator is to have an imposing antenna tower topped with large antennas. Since embarking on the adventure of HF in 2005 I have been using a 9m (30ft) high antenna tower, and have longed for more height. When I acquired my WARC band beam, I dreamed of being able to stack the two antennas on a high tower. Finally this has become a reality during 2010!

In 2008 my friend Donovan ZS2DL obtained a Webb "Galaxy" tower that had become surplus at a local Military base. This tower comprised three 6m long sections and a 3m tapering top section. Upon deciding that this tower would not be suitable for his location, Donovan offered this tower to me for free, provided I arranged collection. Enlisting the help of my friends Glen ZS2GV and Basie ZR2BA, I arranged for collection using Glen's trusty Isuzu LDV, and the tower was transported to my house. As our municipal regulations do not allow a tower to exceed 15m (50ft) we dropped off one 6m section at Basie's home along the way. This left me with two 6m sections and the top section. 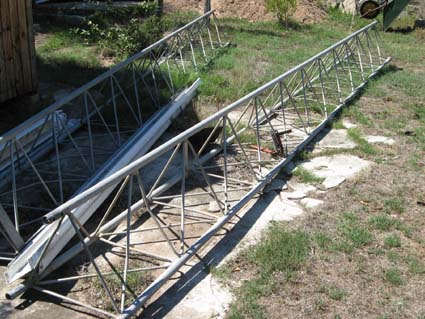 The tower sections stored in the back yard of my house

As the top section of the tower tapered to a point, this made it impossible to fit an in-tower rotator and mast. Basie ZR2BA offered to modify the top section for me, by cutting it and fitting two thrust bearings and a rotator mounting plate. Glen ZS2GV provided a thick-walled 6m pipe that will rise from the rotator through the thrust bearings and support the two Cushcraft beams.

Months dragged by as I tried to determine where I wanted to erect the tower, and pondered on how the tower would be raised. Finally in late 2009 a decision was reached, and I began to look at getting the project under way. The first step was to get a base support "cage" assembled. Basie ZR2BA stepped in, and in February delivered the base assembly cage. Glen ZS2GV and his assistant Elton assisted with the digging of the hole - an impressive 1.1m X 1.1m wide, 1.2m deep pit alongside where my WARC band beam stood. A copper strip (provided by Andre ZS2ACP) was buried around the perimeter of the hole, with a lead attached for connection to the earth spike. A wooden frame was assembled around the hole, and the base cage suspended in place, ready for the concrete to be thrown. 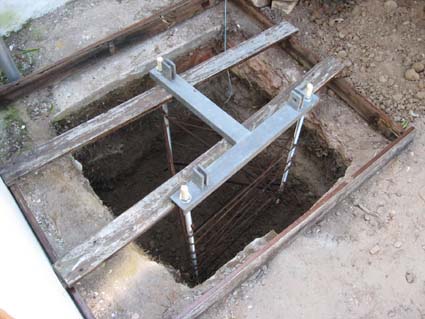 The hole with the base "cage" suspended

In preparation for the mixing of the concrete base, 3 50kg bags of cement and 2 tons of coarse crusher run were ordered, and arrangements were made for a builder to do the work on Saturday morning 6 March 2010. To my great disappointment the builder did not show up to do the job, and was unreachable on his cellphone the whole weekend. Glen ZS2GV then stepped in, and arranged for his helper Elton do do the job on Saturday 13 March. 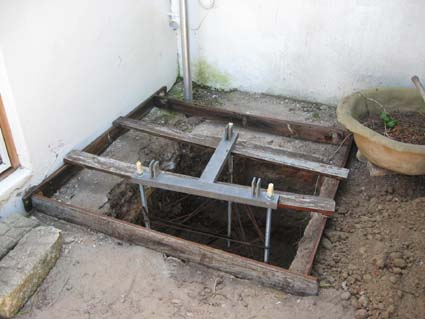 Another view of the hole and base "cage".
(The WARC beam support pole is visible in the background)

The slight angle of the base in the hole is deliberate - the tower will need to clear 3 satellite TV dishes mounted on the side of the house alongside where it will be raised.

As planned, on Saturday 13 March 2010 Elton arrived to mix the concrete for the base. This landed up being a much bigger task than anticipated. The 3 50kg bags of cement did not go very far, and a further 4 bags had to be purchased!

The concrete was mixed to a strong consistency - 4 barrowloads of crusher to a bag of cement. It very soon became apparent that the full 2 tons of crusher would be needed 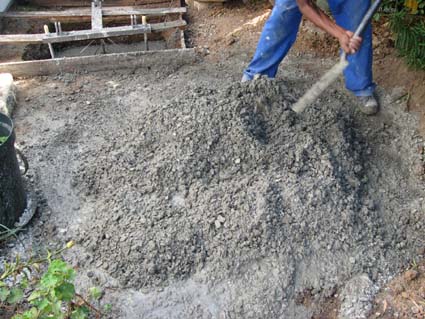 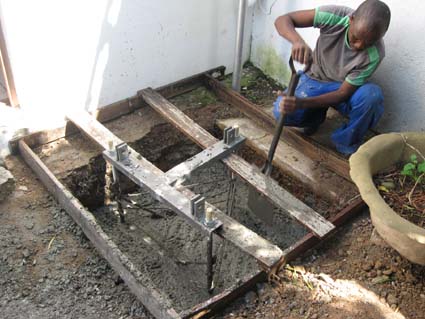 As we reached the end of the crusher, we discovered that we were still a bit short - 6 bags of cement ant 2 tons of crusher had not completed the base! Fortunately we had a quantity of fine crushed stone in elsewhere in the garden, and 4 barrowloads of this fine stone was mixed with the final bag of cement. This worked out well - the base now has a smooth finish and levelled out just as we had hoped. 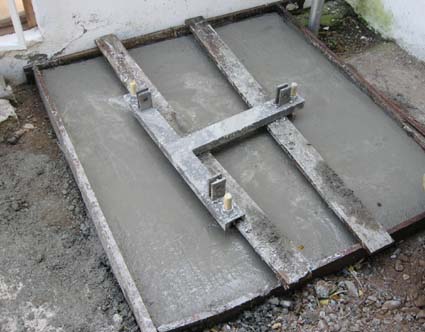 The completed tower base

Finally after a little more than 2 tons of gravel and 350kg of cement, plus around 5 hours of heavy labour the tower base was complete. Now it must stand for a few weeks whilst the concrete sets properly. Phase One of the tower project is now complete.

The tower base after setting for a few weeks

The next step involved the re-engineering of the top section of the tower. This was completed by Basie ZR2BA, and was delivered during March.
The top section now has two 50mm thrust bearings fitted, and has a plate which will hold the Yaesu G-1000C rotator.

The re-engineered top section of the tower

In preparation for raising of the tower, the entire structure was scrubbed down with a wire brush and painted with NS4 Anti-Rust paint as an undercoat followed by a layer of UV-resistant bitumen-based Silvershine Aluminium Paint. This should ensure many years of rust-free service!
The tower was then moved into position and bolted together, ready for raising.

After considerable planning and discussion between Basie ZR2BA, Glen ZS2GV and myself, the tower raising was finally scheduled for Saturday 9 October 2010. After strong winds on Friday 8 October, Saturday 9th dawned wind-free - perfect weather for tower-raising. Due to various other commitments, the tower-raising group of Basie ZR2BA, Glen ZS2GV, Donovan ZS2DL and myself congregated a little after midday and began the operation. Firstly the A3WS WARC-band antenna had to be lowered. Once this was accomplished, we began the task of setting up the winching mechanism. This was when the first real problem reared it's head - the borrowed winch system could not handle the weight of the tower, and it's clutch mechanism began slipping!

In desperation, Basie and Glen added a second double-pulley system attached to the towbar of Basie's LDV. The added pulley system did the trick, and the tower slowly climbed to a vertical position! The final securing bolt was slipped into place, and the raising of the tower was done!

Final adjustments were completed by Glen ZS2GV, and we could then step back and admire the majestic sight! It was however too late in the day to attempt installing antennas - this would (weather permitting) take place the following weekend.

The raised tower secured to the base

Saturday 16 October 2010 dawned a perfect, windless morning, ideal for antenna work! Glen ZS2GV and Basie ZR2BA arrived as scheduled, and work began on the antenna raising. We also received unexpected assistance from Bill ZS2ABZ and Freddie Leibach (a candidate in the October 2010 RAE).
We would be affixing 4 antennas to the tower : the Cushcraft A3WS WARC-band beam (with 30m addon), the Cushcraft A3S tribander (with 40m addon), the Diamond X50 VHF/UHF dualband Collinear and an 80m dipole. Both Cushcraft beams had been fitted with W2AU Beam Baluns, to facilitate the fitting of LMR400 feedlines. The X50 was also fed with LMR400, while the 80m dipole made use of RG213 cable. 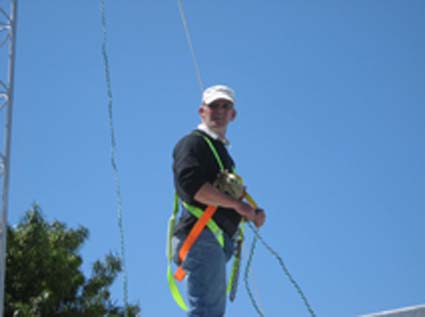 First up was the fitting of a stand-off, which Glen used as a footstand. This standoff would later form the mounting point for the balun of the 80m dipole. Next came the Diamond X50 collinear, which was affixed to the top of the pole. Once this was bolted in place, the Cushcraft A3WS antenna was lifted into position and bolted to the pole. 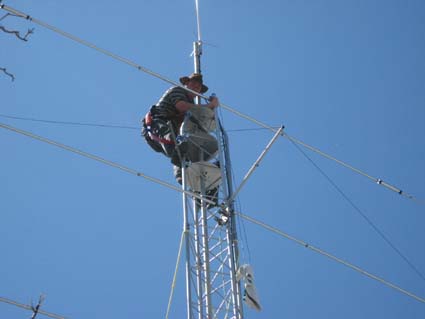 Once the A3WS was in position, Glen raised the pole, tightened the brackets and fitted the LMR400 feedline. 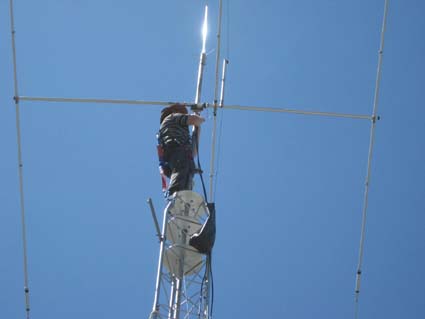 Once installation of the A3WS was completed and the pole raised sufficiently, attention was then shifted to the A3S. The 40m addon kit makes this antenna extremely cumbersome to handle, and it took a number of attempts to get the antenna into position. 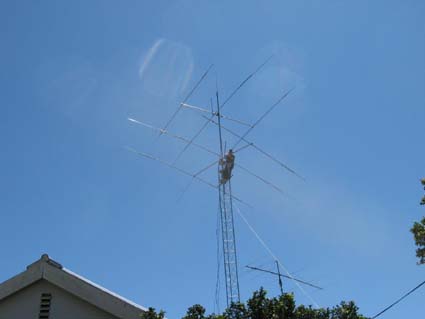 The A3S being mounted in position on the tower

After considerable effort by Glen and Basie, the A3S was finally affixed to the pole, and the LMR400 feedline was attached. Considerable effort went into aligning the two antennas correctly, and it was noticed that the A3S' director had been knocked out of it's horizontal position during the raising of the antenna. The judicious use of a long pool net soon straightened this out! At last both antennas were successfully installed! 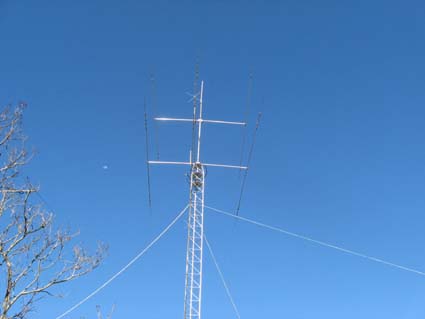 At this stage the Yaesu G-1000C rotator had to be installed. Before this could take place however, the pole needed to be shortened. I had used a 6m long 50mm diameter aluminium pole with a 6mm wall thickness, and with all the antennas fitted the pole was about 1m too long! Glen measured the excess length against the rotator, and proceeded to cut the surplus off with a hacksaw. Once this was completed he fitted the rotator and tightened everything up. We then plugged the rotator cable into the controller box and tested it - everything worked perfectly! We then suspended the 80m dipole from the standoff, and as Glen came down the tower he strapped up all the cabling. We then routed the cabling into the shack and fitted connectors. Once the antennas were plugged in we tested them - everything worked fine! 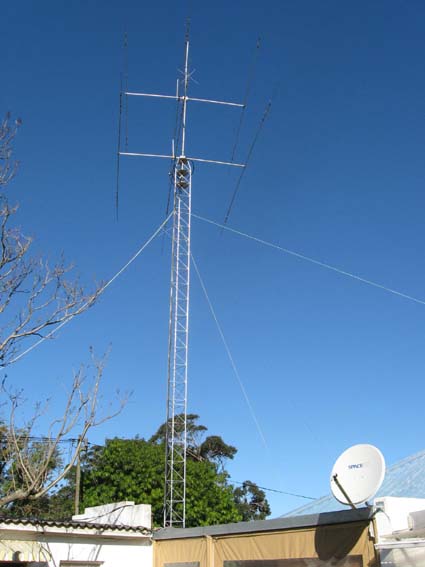 Now only a few small items remain to be done. All that remains is for us to fit a plate outside the shack for lightning arrestors (not a great issue in Port Elizabeth, but nonetheless will be done) and to install earthing kits on the feedlines. I also have some VHF folded dipoles to install on the tower.